It’s the end of the month, and therefore time to update on the ongoing Backlog Project! I first talked about this in early December, but I am trying to spend my gaming time working through a sizable backlog (Steam and otherwise). So the first thing I did was to figure out which games I was currently in the middle of, and try to knock a couple of them off.

Well, over the last week or so, I managed to finish Serious Sam 3: BFE. This was my first entry into the series, and I think I bought it in a Steam-sale-infused fit of madness after having seen a few people playing it on Twitch. It looked like a very old-school style shooter with waves and waves and waves of enemies and lots of giant explosive guns. And it mostly was! It was also fairly difficult in parts, to the point where I ended up micro-managing my save games to get past particularly hard areas that had like 5 of these giant minotaur dudes and roughly infinity undead bulls. 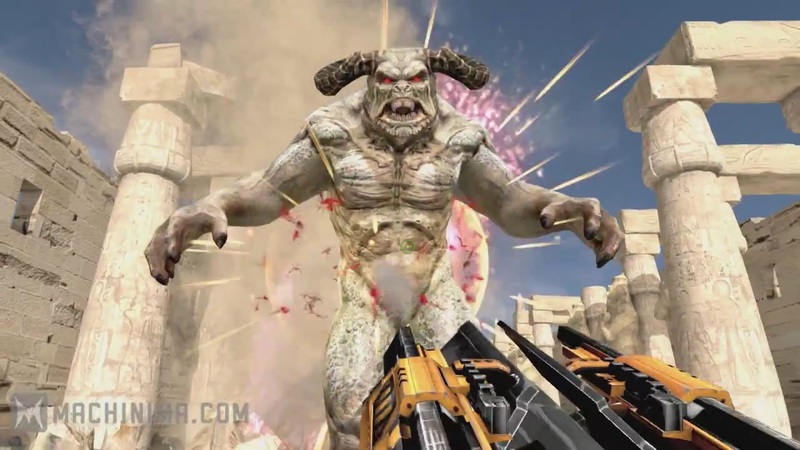 GOOD LORD IT IS HUGE

So, yeah, the actual game was pretty enjoyable as far as shooters go. I haven’t played this style of FPS in ages – everything that I’ve played recently seems to either be more tactical (Far Cry, Crysis), cover-based (Gears of War), or multiplayer-focused. Borderlands is the closest thing I’ve played, and the RPG/quest elements of that make it somewhat different.

On the other hand, the writing and voice acting is really, really, really bad. I mean, I fully believe that this was made as something of a parody of itself – in the way that everyone wanted Duke Nukem to be – and it’s hard to see it any other way (I mean, you set charges and blow the shit out of Ancient Wonders of the World, for god’s sake!), but even so, it’s just hard for me to get behind an over-the-top brotastic asshole of a character. I’d just rather play something else like Borderlands where that character is the insane hilariously-douchey bad guy, and the characters that I am playing are dumb in other ways.

That and I basically had no idea what was going on or why all these screaming headless dudes were running at me with bombs in their hands. Or what the ancient alien devices I was activating were meant to do. Or why I called main bad dude’s kid on my cell phone and got taunted about getting “mooned”. Silly, sure! And even kind of funny! But it just felt like a bunch of disjointed one-liners. Maybe that’s the point, or maybe I’d have appreciated them more if I’d played the other games. I didn’t, though, so whatever.

All in all, I think the relatively mixed Metacritic reviews are about right, for me. It did scratch a particular old-school wave-based shooter itch, though, so that’s saying something!

Next up is Bastion! I think I bought this game on Xbox Live when it first came out, but I never got around to playing it. Sometime since the, I picked it up on Steam (probably in a Humble Bundle), and since it ties in with some other projects, I figured I’d play it there. Well, I’m now a few hours in, and it is awesome. I am even appropriately annoyed at myself for not having played it before!

I love the art style, and the float-up ground is interesting, but what I really like is just the atmosphere. The ongoing narration is really incredible – there even seems to be specific dialogue for really random stuff that I end up doing – and adds a level of immersion that you don’t usually get in these kinds of games. Plus, the various weapons/powers and customization is nice – different loadouts really feel different!

So, yeah, I don’t think that game will end up lasting very long against my assault. And then? Well, who knows. There are a lot of options!