Last weekend, over 1800 people made their way to the Sacramento Convention Center for a Magic Grand Prix event. I was one of them! This was the largest event in California history, and I had a great time. This time, it was Theros limited (so, Sealed on Day One, Draft on Day Two). It marks my second ever GP (the first having come last summer in Oakland for M13 limited), and my best finish yet (6-3, missed out on Day Two by 1 match)! 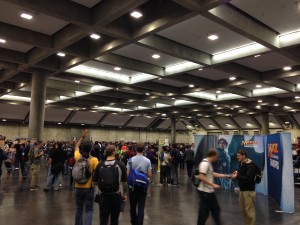 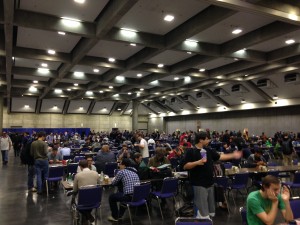 There was another whole half!

I took the day off on Friday so that I could drive up to Sacramento early and participate in some of the side events going on. The thing to know about these events is that, while there is a two-day 18-round main event, there are other sanctioned events constantly going. Drafts, Sealed events, Standard/Modern/Commander tournaments, some 2-Headed Giant stuff, etc. Plus, there are countless pick-up games and tons of trading.

With that being said, I arrived relatively early on Friday and jumped into the queue for one of the Last-Chance GP Qualifiers. I ended up picking Sealed, mostly because I wanted to get in a little more limited practice, and it seemed like a lot more people were signing up for Sealed than Draft. This ended up being a great decision for a lot of reasons, not least of which is that there were something like twelve Sealed events launched, while only one or two Drafts ever fired.

The other reason, of course, is that I ended up winning my 32-person Sealed pod! After five rounds of single-elimination play, I ended up winning quite a few prizes – a box of Theros (second place got one, too), an upgrade to the VIP package for the weekend (including a playmat, a fancy pin, and a ticket for another event), and two byes for the Main Event. Awesome! It’s definitely true that I got a bit lucky and ended up with a really strong pool, but I also felt like I managed to play well – and I felt like that is what carried me through to the end. Here’s a look at the deck (the two empty sleeves were a Temple of Abandon and Elspeth, Sun’s Champion): 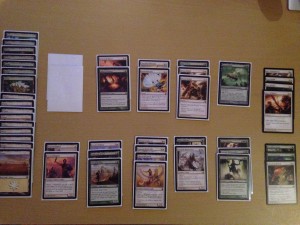 The unsleeved cards on the right were my most-used sideboard cards (particularly the top set). The rest of the pool looked like this:

In retrospect, I probably shouldn’t have played the Nylea’s Presence main-board. I was thinking about the possibility of Scholar of Athreos activations, but that seems a bit greedy (and never really came up). I suppose it was useful given the fact that I had two different cards that both wanted three mana symbols (Arbor Colossus and Hundred-Handed One), but I still think one of the removal spells or even the Chosen by Heliod would have been a better choice for consistency. That said, it was clearly very good!

So that sets the stage for Saturday. I’d already gone 5-0 in sanctioned events, and my byes had pushed me to 2-0 in the Main Event before I even opened up my pool! As a player with byes and the VIP package, I got to show up a bit later, and build my deck while the first round of the event was being played. I never feel like I have enough time for deck-construction, and this weekend was no different. I ended up torn between two options, and I think I ended up choosing the relatively weaker one. Here’s what I came up with: 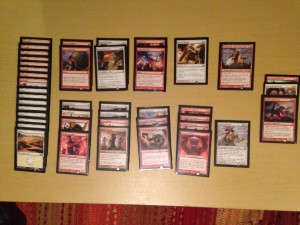 Again, the three cards on the right were primary sideboard cards (and the Ember Swallower was just a mistake to leave out – it came in for a Cyclops every time). I know in my heart of hearts that playing an aggressive deck in Sealed is really hard and generally a no-no, but I had so many one- and two-drops! Turns out I also had a lot of 4-drops, which is why it often ends up falling short. But, honestly, I ran fairly well. I think, ideally, I might have used my third Traveling Philosopher and cut yet another of the 4-drops, but it’s hard to say. If I’d had an Ordeal or a Gods Willing, I think those would also have helped. But I did not.

The other deck option swapped out the White for a pretty strong set of Blue cards. It would have looked something like this: 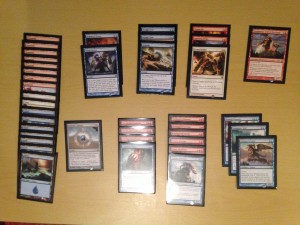 I even sleeved these all up and got the mana prepared so that I could do a heavy sideboard into it (and I probably should have against at least one Green-based heroic opponent), but I never actually deployed it in the heat of battle. The top end on this deck is stronger, I think. There are 5-6 (depending on whether I kept the Divine Verdict) removal/bounce cards, more high-impact creatures, and some evasion. It’s light on early plays, though, so I may have always just been struggling to stabilize. Hard to say.

Here is the remaining pool: 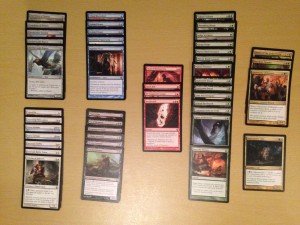 Any thoughts? Should I have played the shallow black or the mediocre green?

Overall, I was pretty happy with how things went, even if I know that, looking back, I might have built things slightly differently. I ended up making it to 6-3 in the main event, which is a pretty strong finish. I was playing in the last round, trying to get in to Day Two, and I ended up with an overall 11-3 match record for the weekend (including my 2 byes). So, that’s good! But it would also have been nice to do even better. I definitely made some play mistakes (including missing an active Purphoros for a couple of turns, and mis-sequencing my plays on several occasions), but I’m bound to do that when I’m not used to playing competitive matches for 18 hours out of 36.

As for the rest of the weekend, it really was a great time. In general, the atmosphere is very welcoming – most people are willing to chat with you in between games (or even, to some extent, during them), and everyone is really just there because they enjoy the game, which is great! I got to watch Brian Kibler play a few games (and the speed of his shuffling feels even faster in person), and I was seated next to Josh Utter-Leyton – who seemed perfectly nice, if definitely focused – in the final round at 6-2 playing to get in. There are folks from Wizards wandering around and playing pickup games with people. A bunch of artists come to each of these – yes, I did get my Revised Brass Man and 4th Edition Leviathan signed – and will do sketches or sign prints or whatever. It’s very cool to see the full frame versions of some of the art that makes its way on to cards.

And, if you happen to be in Sacramento, I can definitely recommend Burgers & Brew. I had a chorizo burger that was incredible, half a bottle of Saison Dupont and some Duchesse de Bourgogne on tap. Yum!

All-in-all, I heartily recommend making it to one of these events if you can. Even if you don’t end up playing in the Main Event, there is plenty to do, and being part of the atmosphere is great fun.