The WoW level-slowly-in-instances thing that helped re-hook me over the summer is coming along nicely. And as we were approaching level 70, our fearless organizer Mangle wondered aloud whether it might be fun to take a few at-level pokes at Karazhan again. Fueled by a nostalgia-induced haze, many of us quickly agreed, and last week a few of us finally made it to 70 and capped our experience gain thanks to Slahtz, the hidey NPC. Well, now Mangle is off on some Australian snorkeling adventure, and it didn’t seem right to see this thing through without him. So the group of us that was available this week decided we’d check out some of the notoriously difficult TBC heroics.

Keep in mind that, while I was very much playing during Burning Crusade, I was still learning how to hit the level cap. I only barely managed to do so during Vanilla – joining in on a month or two’s worth of Molten Core, Zul’Gurub, and AQ20 runs with my brother’s guild, and while I did level up that same (shadow) priest fairly quickly in BC, I quickly fell back into the “WHAT CHARACTER SHOULD I PLAY AND WHERE SHOULD I PLAY IT” doldrums for much of the rest of the expansion. All that is just a long-winded way of saying that I don’t have nearly as much previous experience and stories concerning these particular instances as the rest of the group I’m running with.

So when we jumped into a few heroics (Sethekk Halls, Shattered Halls, and Magister’s Terrace) and they turned out to not really be all that much more challenging than the normal versions of the same, it was pretty easy to fall in line with the general consensus that this was all a bit disappointing. No longer did you need copious amounts of CC and very careful pulls. While it was possible to end up dead as a tank, it wasn’t all that consistently dangerous – it just meant that the healer couldn’t be off sending text messages (yes, that did happen).

There are a lot of reasons for that, obviously. The game has been changed in significant ways since TBC was current. Itemization is totally different, we all have different skills (and no real “ranks”), various contents have been nerfed. And, of course, we all have a lot more experience with the “heroic” style of instance. But, whatever the reasons, it’s just a lot easier than it used to be.

However, the more I think about this, the more I’m convinced that it is actually okay. I mean, look, I’m only even doing these instances at all because of nostalgia. And do I really want to have to go run around and gear up to full/mostly full normal gear so that I can get creamed in Heroic Shattered Halls because I didn’t happen to get the nostalgia bug with a group of people that happened to have exactly the right number of mages? No, of course not. This way, I get to roll in there, fight some dudes that are (slightly) harder than normal, reminisce about how many times we had to run these or how much of a pain in the ass it was to get keyed for <whatever>, and then move on to the next thing.

That’s the thing about nostalgia. It’s a powerful motivator to go back and attempt to recreate a previous experience. But it really does put blinders on regarding all the terrible things that we all bitched about at the time. And nostalgia, for me at least, really does burn bright and hot – and fast. So being able to consume these instances at a reasonable pace – and without all the headaches of farming Karazhan for a month before we try one of the larger raids – is actually perfectly reasonable. This isn’t the content that I’m going to spend months and months on – we’ll probably spend another couple of Monday Nights time on it and then move on – and that’s pretty much exactly where these things now sit.

And in the meantime, we’ll all be playing all the rest of the parts of the game that are perfectly fun. I mean, sure, nostalgia brought us back, but it has been six months and we are still going relatively strong, so clearly WoW is doing something right. Oh, and we’ll be arguing over what the right class to instant-level to 90 is. When we are all pre-ordering the next expansion pack.

Plus, I got a cool shield to go with a dumb hat and axe made out of floating crystal stuff. So, basically, it really IS like I’m playing TBC again. 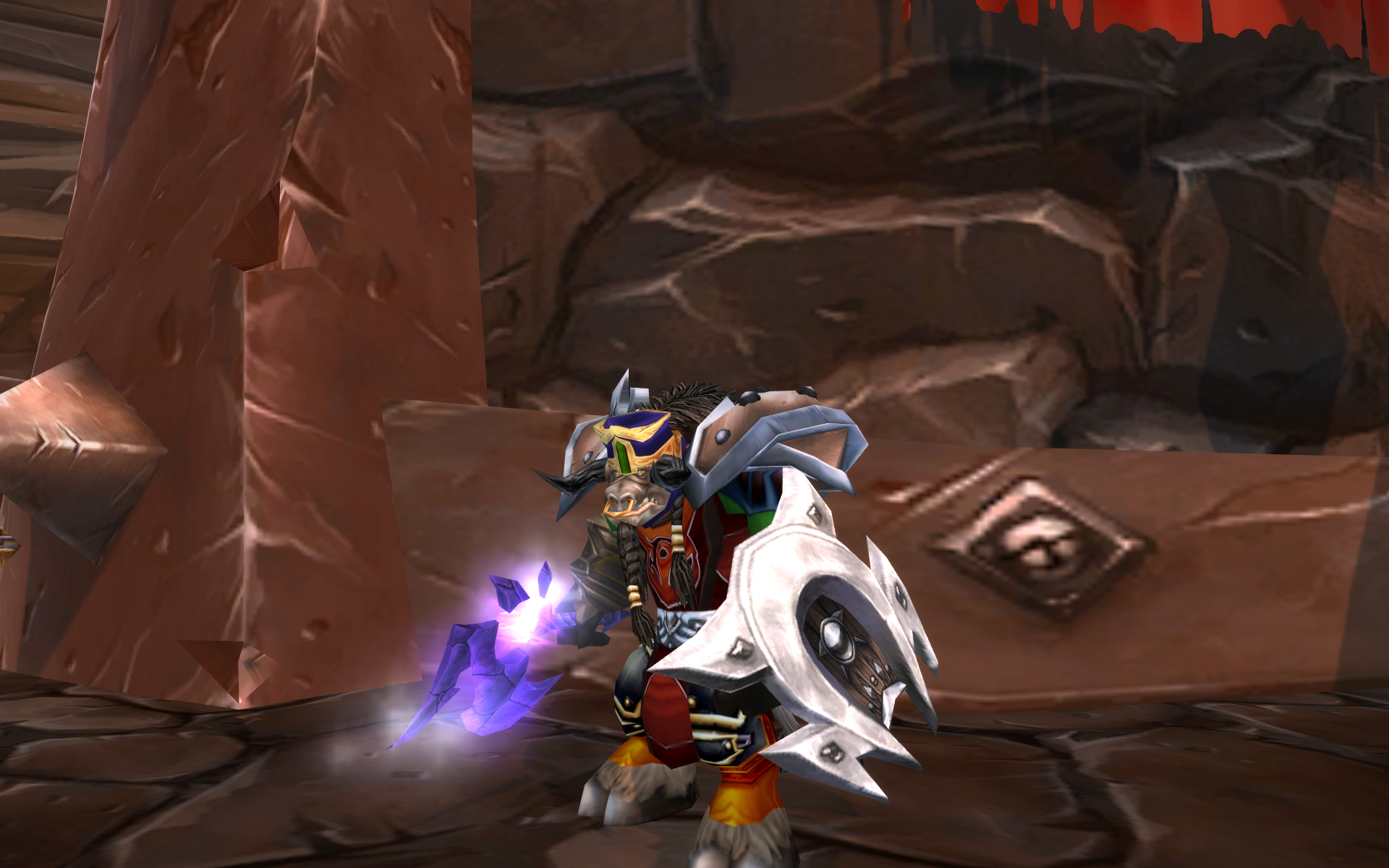 Look at my hat, my hat is amazing